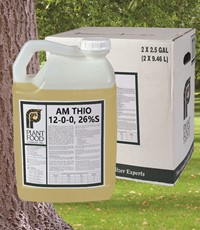 Ammonium Thiosulfate is a neutral to slightly basic (7 - 8 pH), clear liquid solution, containing 12% nitrogen and 26% sulfur. Ammonium Thiosulfate is compatible with most liquid fertilizer materials. Nitrogen and sulfur are important components of proteins. Sulfur deficiency can affect the plant’s ability to utilize nitrogen for protein synthesis.

Thiosulfate sulfur is unique in that it exists in two oxidation states. This gives it enhanced pathways of availability more suitable to the sulfur uptake patterns of most plants. When applied to soils, Ammonium Thiosulfate decomposes to give approximately equal parts of sulfate sulfur (S04 -2) and elemental sulfur (S0). The sulfate sulfur is immediately available for plant uptake, whereas the elemental sulfur S0 must undergo oxidation to a sulfate S04 2 before it can be absorbed by the plant.

The advantage of thiosulfate, in comparison to other sulfur forms, is that the sulfur need for plant growth becomes available over several weeks. When sulfur is applied totally in the sulfate form, some may be lost to leaching - the result of rainfall and/or irrigation water moving this form below the root zone. When elemental sulfur is applied, oxidation to a sulfate form must occur before it becomes available to the plant. Thiosulfate helps supply the plant’s sulfur needs quicker and longer than other single form of sulfur.

Application Precautions: Do not apply Ammonium Thiosulfate directly on or below germinating seeds such as in a “pop up” fertilizer. Dry soil conditions and/or combination with other starter fertilizers may damage germination. Always irrigate with sufficient water to reduce the possibility of fertilizer injury. Avoid application during mid day when temperatures are high.

Ammonium Thiosulfate should not be mixed with acids or other acidic materials below a pH of 6.